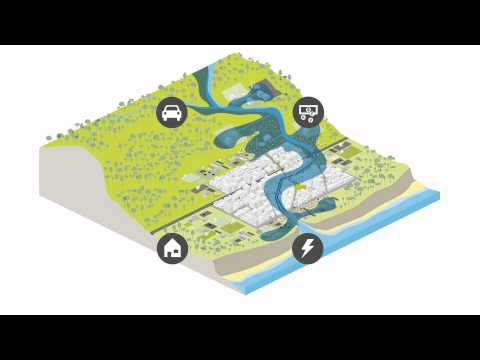 Living and designing with water

Verslag 12 October the 10th Architecture Biennale of São Paulo was opened. Posad contributed to the exhibit with the animation ‘Living and designing with water’. The animation examines the relationship of man and the city to water. Brazil and Netherlands both stand for several major tasks to give water a place in our cities and find a proper balance between enough and too much water. Through trial and error, the Netherlands learned to live with water, rather than only defend itself against it.

After a workshop in 2011, Posad became more involved in Brazil. This year the Brazilian sister-office Posad-Rosa was opened in São Paulo.The animation screened at the biennale was created together with Studio Duko Stolwijk and was made possible by the Creative Industries Fund NL.

Water is a primary condition for life. A human consists of approximately 60% of water. We need about 2 litres of fresh water every day. This water transports nutrients and waste in and out of our bodies, keeps our organs working and our temperature balanced.
Just like our bodies, water is a central part of the intricate system of a city. The water cycle of a city is one of its most important urban systems. Since all systems, both natural and man-made, are connected to the water cycle, keeping it balanced is a requirement to maintain healthy, liveable cities. Yet, the urban water cycle is a precarious system. Many cities around the world are coping with serious imbalances in their urban water systems.

Rediscovering the qualities of water to make cities and landscapes more resilient, is a challenge that involves many different stakeholders. Working together is key in (re)designing our cities. In both the Netherlands as well as Brazil.
This requires a change in how we look to the water. Instead of seeing water as a risk, water needs to be seen as an opportunity to make more beautiful and balanced cities. In the Netherlands we are just doing this.
Engineers, ecologists and spatial designers work together to discover how nature and technique can enhance each other to alleviate risks while create spatial quality, unique public spaces and new opportunities for economy, ecology, housing and mobility.

Domestic, industrial and agriculture water use

We daily use water for drinking, preparing food, taking a shower, washing our clothes and flushing the toilet. Globally, domestic use is about 10%. Relative to other sectors, water withdrawal for urban use is low.
Agriculture requires large quantities of water for irrigation as well as good quality water for various production processes. Water for irrigation and food production constitutes one of the greatest pressures on freshwater resources.
Agriculture accounts for around 70% of global freshwater withdrawals.
Approximately 20% of the world’s freshwater withdrawals are used by industry. Water withdrawal for industry are most often reported in combination with those for energy. Energy requires water for powering turbines (hydroelectricity), cooling power plants (thermal and nuclear electricity) and growing biofuels.

‘Living and designing with water - Afbeelding 1’

‘Living and designing with water - Afbeelding 2’

How the city changes the water cycle

Outside of the city, naturally, soil and vegetation absorb 90 percent of rainfall through infiltration in the soil (50%) and (evapo-)transpiration in the air (40%).
Cities drastically reshape the natural water cycle. Within the city; streets, sidewalks, squares and roofs shed water rapidly creating huge volumes of fast runoff.
In urban areas, still 30% transpires into the air, but only about 15% infiltrates.
This difference between the natural and urban water system causes that densely developed urban areas can create up to five-and –a-half times more runoff water than natural areas of the same size.

Water in the city of São Paulo

The water cycle of a city is one of its most important urban systems. If the water system gets out of balance, it destabilizes other natural and man-made systems.
Also in the city of São Paulo, the out-of-balance water system is causing a series of problems.
The large abundance of fresh water was one of the main reasons for the Portuguese settlers to choose this location to found the city of São Paulo. It is the source of energy and drinking water for the city.

For a long time, the water had an important place in the public life of the Paulistans. Yet, today water is one of São Paulo’s mayor challenges. Pollution threatens the availability of fresh drinking water as well as the energy production. Floodings threaten mobility and liveability. This has resulted in a situation in which water is seen as a threat for the city – that has to be solved technically – instead of a potential to create a spatial quality and contribute to the liveability of the city.