Planning for civic change / responding to complex environments
In her recently completed doctoral thesis, Sharon Wohl, Assistant Professor in Architecture and Urban Design at Iowa State University, considers how the fabric of built cities can operate in ways consistent with the dynamics of Complex Adaptive Systems (CAS). Dr. Wohl’s research focuses on how, under certain circumstances, the characteristics of urban form can support an environment’s capacity to self-organize, enabling emergent features to appear that, while unplanned, remain highly functional.  Her dissertation sets out to determine The physical and morphological conditions needed to be in place in an urban environment in order for Complex Adaptive Systems dynamics arise - such that the physical components (or ‘building blocks’) of the urban environment have an enhanced capacity to discover functional configurations in space and time as a response to unfolding contextual conditions.

The work is significant in light of the difficulties involved in effectively planning in the uncertain context of urban environments. Cities are complex entities, and intervening within the built fabric to achieve desired ends is often referred to as a ‘wicked’ problem – being ill-defined, with unclear boundaries, and multiple, shifting parameters. Such problems are notoriously difficult to solve using traditional approaches.

Complex systems theory provides tools with which such problems might be addressed. Rather than trying to predict and control system functioning, complexity dynamics allow configurations to emerge through the interactions of bottom-up agents that adapt their behaviors in response to local inputs. These agents, each acting in their own self-interest (while also being steered, in part, by information flows amongst them) are able to generate ‘fit’ emergent behaviors.

An example of such complex, emergent behavior can be found in the biological example of ant trail formation. Individual ants, without central command and control, are able to collectively generate ant trails leading to food. The trail is an emergent, global phenomena, brought about through the individual (and initially random) behavior of the ant, with pheromone deposits left by ants who have found food providing an information relay that, over time and with reinforcing feedback, steers the overall behavior of the colony.

While many examples of such emergent, bottom-up and self-organizing behaviors can be found in natural settings (we can think of flocks of birds, schools of fish, and the collective behaviors of honeybees), the dissertation considers how similar principles might ‘play out’ within the urban realm. Accordingly, elements of the urban fabric are conceptualized as elements or ‘agents’ within a complex system with an embedded capacity to respond to changing urban forces.

Dr. Wohl proceeds by framing typical elements within the urban fabric - be they housing units, retail spaces, street furniture, or trash receptacles - as ‘agents’ within a complex system. These agents should, ideally, function in a ‘fit’ relationship relative to the possibilities of their environmental context. Thus, a neighborhood with a housing shortage that simultaneously hosts vacant retail spaces would be an example of an urban scenario where agent fitness has not found an appropriate equilibrium – some urban niches are overcrowded whereas other are empty.  Similarly, park benches that are never sat upon, or public trash bins that are overflowing, are both examples where urban ‘agents’ - the bench or the bin – are not operating at their optimum. In the case of the bench, the urban resource is being under-utilized. In the case of the trash bin, it is being over-utilized. Wohl wishes to understand how we might design such urban elements in ways that would enable these to better calibrate their functioning with respect to their environmental context. Such calibration might involve shifting function or shifting location – either autonomously or in ways assisted by human intervention.  In cases where human intervention is required to ‘activate’ the shift, the urban elements can nonetheless be designed in such a way that such shifts are more easily accommodated or afforded. We can, for example, imagine that providing parks with movable chairs rather than fixed benches creates the conditions whereby, over time, chairs will migrate to locations where they are more apt to be used.

Wohl attempts to formulate general principles whereby urban elements can be designed with these inherent adaptive affordances – enabling their performance to easily be altered to achieve greater fitness. Wohl Further considers how such urban agents might, in some way, communicate with one another about their relative fitness in order to better steer global agent behavior.  In the same way that pheromone signals guide ants towards reliable food-sources (and the more ants that leave pheromones, the stronger the trail), Wohl looks to determine the ways in which physical traces within the built environment can offer clues to fit behavioral regimes. A well-worn pathway, trodden across a grassy plain is, for example, a material indicator of a ‘fit’ route, and Wohl explores how other material properties might, in some way relay signals of fitness.

Central to the dissertation is a detailed examination of Istanbul’s Grand Bazaar.  Drawing insights from related research in Evolutionary Economic Geography, Wohl examines how distinct districts of common merchandise emerge in the bazaar without need for top-down control. Wohl characterizes the Bazaar’s 4000 shops as each being ‘agents’ within a complex adaptive system. The shops are typically independently owned and of small-scale, enabling their owner to transform their function with relative low-investment. Wohl argues that information signals embedded within the ambient environment of the bazaar help steer successful transformations of the built fabric, and that the fabric is itself amenable to such transformation. She notes that many contemporary environments lack both this ambient information (that both signals and steers success) and the necessary flexibility of built components to be responsive to such signals. 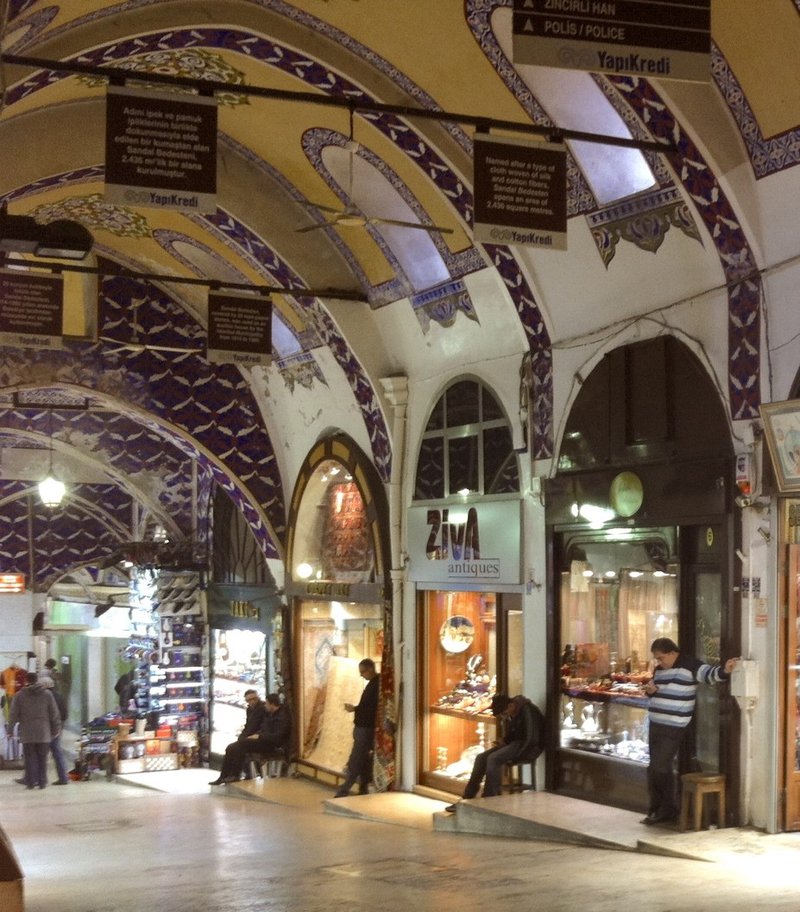 Image from Istanbul’s Grand Bazaar, where districts of similar goods emerge over time without top-down control.

The dissertation ultimately extends this research to consider digitally augmented urban elements that hold an enhanced ability to receive and convey information. A series of speculative designs, based on research conducted by students in Iowa State’s Department of Architecture, highlight how increasingly autonomous urban entities might be able to self-organize into fit, emergent, patterns of use without need for top-down control. Here, urban elements, conceived of as agents, are embedded with sensors that relay signals amongst agents regarding use. These signals, combined with actuators, enable agents to redeploy to new locations if their functionality at a given site is low relative to other agents in the system. Agents then seek out new more ‘fit’ niches in response to environmental signals and without need for top-down control. These examples of a tech-enabled ‘swarm urbanism’, point to how we might, in the near future, address urban problems using complexity.

Finally, in the context of the Netherlands, it is interesting to note similarities between the spatial fabric of Dutch canal architecture, and the spatial character of shops in the Grand Bazaar. Traditional canal architecture can easily be partitioned into separate functions, floor by floor, or agglomerated into larger units both between floors and between buildings. The inherent flexibility of this fabric means that canal buildings can take on a host of functions - such as homes, offices, shops, hotels, or cultural facilities. Wohl argues that, by easily accommodating multiple kinds of programmatic needs the built fabric is inherently more adaptable in response to changing economic forces and, therefore, more resilient. Moving forward, Wohl’s work aims to establish a lens whereby new interventions can be evaluated with respect to this inherent capacity for long-term resiliency.

Dr. Wohl’s Thesis can be found in book form at: books.bk.tudelft.nl

Wohl’s student research is referenced in a book chapter by Francis Heylighen, found in the recent publication, ‘de humane stad’