The research proposal for REPAiR is perhaps best explained by deconstructing the acronym itself: ‘REsource Management in Peri-urban Areas: Going Beyond Urban Metabolism’. Arjan explains: “REPAiR is related to the circular economy, and the need to translate this notion into concrete tools and strategies to realise structurally improved or differently organized environments. It is a re-design.” Tools will be generated to help local and regional authorities to apply and support circularity in peri-urban areas. The project works with a consortium of 18 partners, and over sixty people, spread out over six locations in six countries in the European Union. Each location has its own challenges, providing the researchers the opportunity to explore many contextual settings and stages of transition towards circular environments at once. Alexander: “Amsterdam, Ghent, and Hamburg have established a functioning waste management system with elements of circular development. For example: glass, paper, and often also other fractions such as plastics are collected separately. But there is still potential for more resource efficiencies and circularity in the industrial sector, specifically in the building industry. Another potential comes from the shift from incinerating waste towards recycling.

Goal: to create an innovative Geodesign Decision Support Environment (GDSE) that will be used to create integrated, place-based eco-innovative spatial development strategies promoting the use of waste as a resource’ 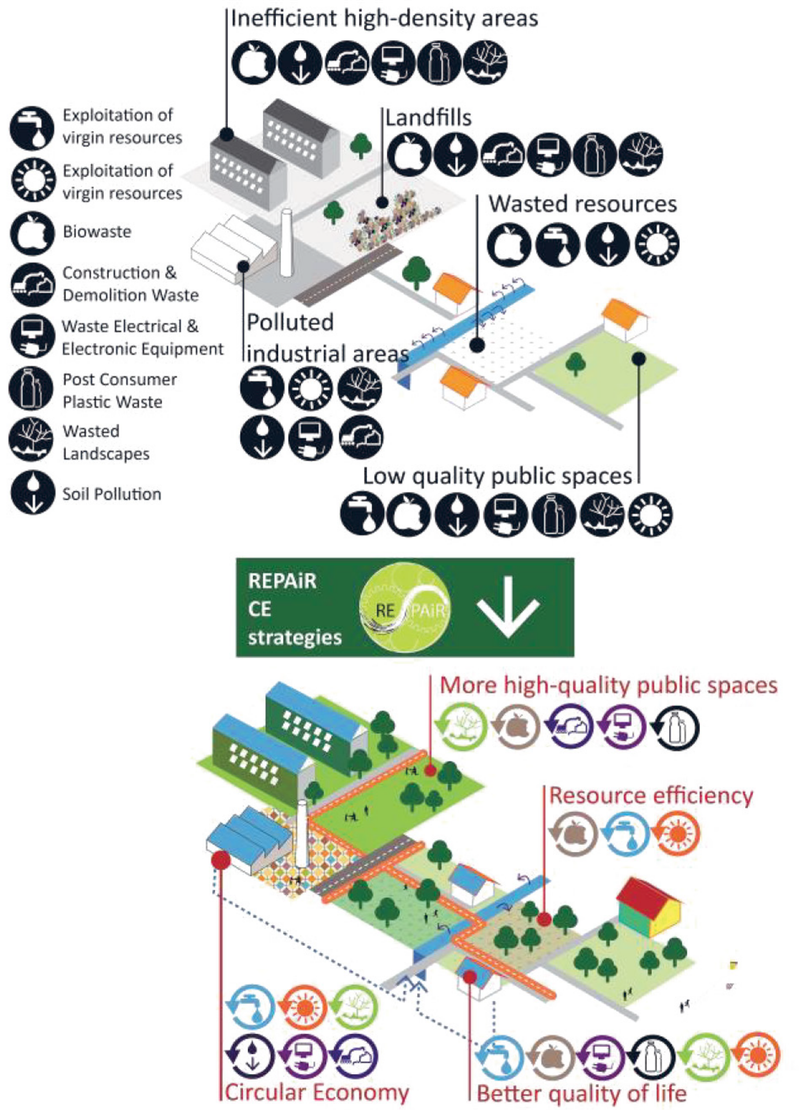 Then we have Naples, which is in our opinion really an exceptional case. Here, due to influence of the mafia and the development over the last century, the whole territory became actually literally wasted. If you look at a recent US army report1 (they have a military base in the area), you see that the cancer rate is much higher, because the water is poisoned or polluted. A huge percentage of all the vegetables and food that grow in this area are not only consumed locally, but also exported. So in this case we are actually talking about a life threatening situation. Finally we have Łodź (Poland) and Pécs (Hungary), which actually, on paper, are where we are in terms of policies, although landfill still is taking place. Since the 1990’s they are also trying to cope with the problem that their cities are sprawling. This brings them problems with organizing the circularity.”

The specific focus and scale of the peri-urban was chosen on purpose, too. Arjan: “The urban context is essential of course. Cities have their own ‘metabolism’, but what a lot of people do not realize is that these urban flows mostly are processed or generated in either their fringes or outside the city.

There is a clear relation, or reciprocity, between the urban city and rural hinterland, with in between the peri-urban areas. These areas show a condensation of both problems and potentials. Most of the times it is here that waste is being managed or treated. This happens for example in water treatment plants or waste separation stations, but also in incineration facilities. At the same time these areas are really fragmented, with all kinds of delicate functions ranging from residential buildings to food production.” Alexander: “Exactly, when you travel around a city and you realize that that is where we ‘hide’ all those things… At the same time a lot of people live here. Actually, the majority of the European citizens live in the outskirts of cities. And these areas were hardly or never in the focus of planning and design.”

“IT IS PRACTICE, AND RESEARCH, AND DESIGN, ALL IN ONE”

How is continuous circularity secured and what does this imply for aspects such as infrastructures, spatial quality and flexibility of such areas? How are spatial planning, urban, and regional design being adapted to make circularity happen? What does a circular landscape look like? These are questions at the core of REPAiR.

Any project that tries to incorporate urban or societal flows is subject to the changeability of those flows. So it requests a new kind of planning that addresses solutions to incorporate continuous change. The case of Naples is an interesting one here as well, as the city is a result of centuries of stratification processes. Only rather recent developments added a layer that resulted in what are considered the wasted landscapes and droscapes. The question here is: how to further develop this latest layer in such a way that the wasted landscapes will be restored into collaborative, clean, and productive areas which add value?”

When Arjan and Alexander talk about the project and the project locations, you hear their enthusiasm about the subject and their eagerness to start the research, development, and design work itself. Not surprising considering the fact that it took over a year to get the research proposal through the tendering process of the European Union. Arjan: “We had the research granted just before Christmas. But before we could share it with the world we first had to take all kinds of legal and procedural steps. Now everything is in place, we can really start the research.”

These numerous preparations have led to an ambitious four-year project. According to the research proposal the goal is ‘to create an innovative Geodesign Decision Support Environment (GDSE) that will be used to create integrated, place-based

eco-innovative spatial development strategies promoting the use of waste as a resource’. Arjan: “It is about using data related to geographical locations. The problem of circularity is that, at the moment, we try to achieve circularity by looking at the output side, the production of waste, or as we consider it: resources. The problems however regard the business

case and are mostly on the missing demand side and, of course, on how to you match the two. You could simply say that every time you take up a resource and let it become waste, it lowers your business case. So what you try to do is to leave the resource close to the place with its highest value, and also to what we name its ‘mine’, which is mostly urban. This is where GIS comes in. If you know how and where to locate all the resources and potential matches, you can also support making the right decisions to really achieve business cases. These are mostly based on integrated concepts: ‘eco-systems services’.”

Alexander: “And of course there are a lot of stakeholders involved. If you want to make circularity work, you have to create possibilities for synergy and cooperations. The idea of the tool is to add the spatial dimension to these facilitating synergies and cooperations. This geo-design approach is, simply speaking, nothing more than bringing together geographic science, design science, ICT science, and the people of the place. The key is to use design, our core profession, as a tool to make integrated strategies. Not to have one strategy for every city, but to provide stakeholders with a variety of solutions for different problems. We also want to show how solutions are interrelated to each other, so that the stakeholders can make better informed decisions.” Arjan: “The notion of circularity is still far too often just a theoretical notion. To support its success, circularity needs to be embedded in spatial planning, while regulations will need to support and not limit cases. This can imply the need for so-called ‘freezones’, for example like they aim for in Almere. The project also is connected to parts of the education programme. We will run an elective course within the master programme of Urbanism.”

Alexander: “It also can be a graduation topic within the urban metabolism research group in the next graduation studio for Urbanism. And by the way, it is not only for urbanism students. We are trying to connect it seamlessly to the Geomatics master and the Master of Management in the Built Environment. It will learn students an innovative and interdisciplinary approach to spatial planning and design.” Arjan: “It relates strongly to both the existing and future field of practice.” “REPAiR will be an open-source development, another aspect of what the legacy of the project should be,” adds Alexander. “It is not that we will make a finished product, a tool, that can be used for twenty years. The tool has different modules: an

assessment tool, a decision support tool, a knowledge management tool, and a knowledge transfer module. All these sub elements form the process and software, and are going to be open source, meaning: they can be used as well as developed further afterwards. I think that is also proof of the legacy.”

When asked to further specify the educational part of the project, the two researchers show that they have plenty of ideas and energy for that part, too. Arjan: “We will include advanced GIS skills and development.” Alexander: “I think what is important for students is that maybe they are overwhelmed by the complexity of the project, but graduation projects will only look at dedicated aspects. There are a lot of topics that can be brought together, starting with the spatial setting as a room in which students can actually have discussions among each other.” Arjan: “And with practice. Because the case studies and the subject of circularity are at the forefront in real life. It is real time and connected to real projects.” Alexander: “It is practice, and research, and design, all in one.” Arjan: “I think it is a difficultstory to tell, but still worth telling it.”